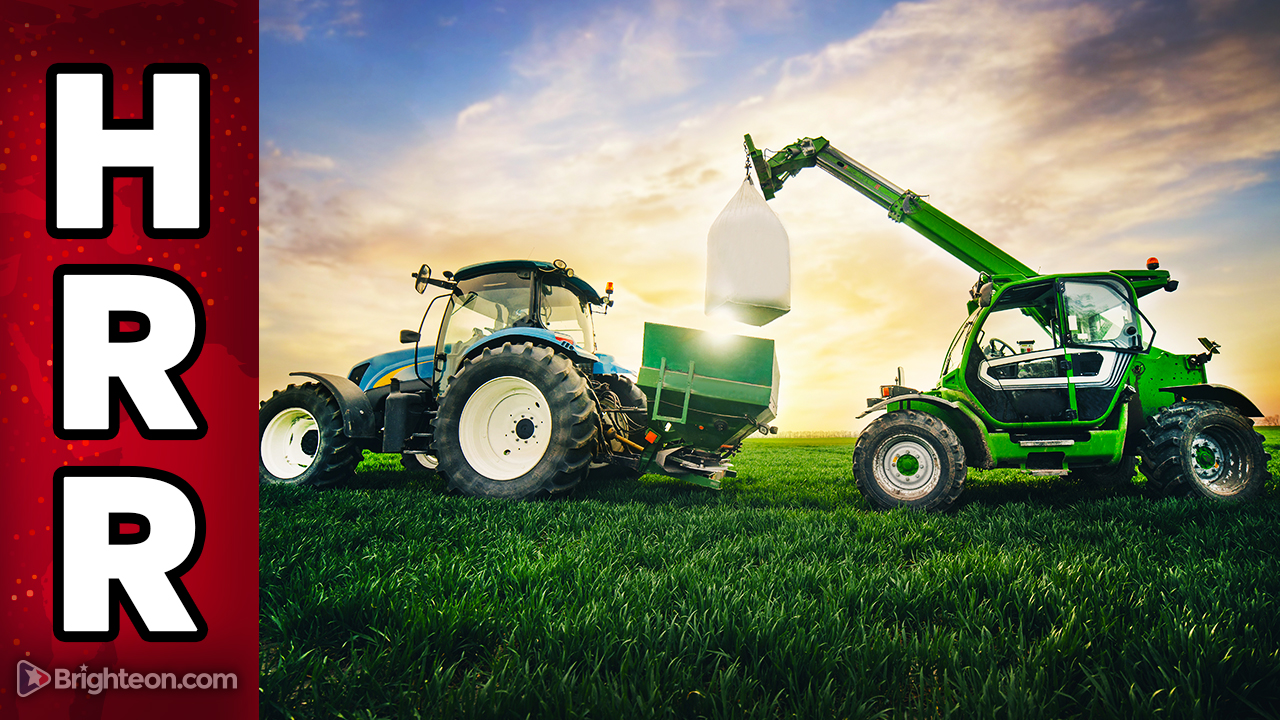 When the USA and NATO countries engaged in economic warfare against Russia by de-platforming Russian banks from the SWIFT system in March, it set off a chain reaction of world events that will lead to global famine and food scarcity panic. Fertilizer and the natural gas used to manufacture fertilizer are now in short supply around the world. Many prominent food producers such as India have turned to export bans (food protectionism) to secure their own domestic supplies, worsening global food scarcity. Rising fuel costs have only added to the problems, resulting in far higher costs of farm inputs across the world. But now America's domestic food production is collapsing as well -- and seemingly for the same reasons. Sky-high fertilizer costs, fertilizer scarcity, insanely elevated diesel fuel prices and supply chain problems affecting agriculture equipment are all contributing to an alarming trend across America: More and more farmers are simply not planting crops. There's no economic reason to do so. Rising fertilizer prices make the crops a money loser from day one. Even if a farmer invests in the fertilizer, his ability to harvest and transport the resulting crops out of his own fields is increasingly questionable. Worsening the situation, drought conditions are so bad that rice farmers in California, for example, are being told by the water control authorities there that they will only be allowed 0.4 acre feet of water per acre. You can't grow rice in less than five inches of water for the entire season. So they're not planting most of the rice. Only 70,000 acres are getting planted out of 450,000 acres that could be used. Worsening the shortage, California has decided to divert water into the Pacific Ocean for environmental reasons, rather than let rice farmers use the water to grow food. From that story: “In April 2022, the water districts serving Colusa County were given their final allocation for the 2022 growing season – 0.4-acre feet per acre,” Colusa County officials said in a statement. “This allocation is not enough to support rice production, and estimates show that the Sacramento Valley will fallow 370,000 of 450,000 acres in the Sacramento River Settlement Contractors service area, primarily in Colusa and Glenn Counties. Currently, less than 7,000 acres are estimated to be planted in Colusa County, resulting in a direct financial loss to growers in excess of $270 million.” As described by an editor at USSANews.com, this policy is truly insane: As a former rice farmer in northern California, I can testify to the stupidity and insanity of environmentalists who favor obscure fish over humans. Water to farmers is now below growing levels and will cause devastation to the 2022 rice industry, taking down farmers as well as all related industries. The fact that the world is facing a major food shortage means nothing to these environmental zealots. When Californians have no rice on their food shelves later this year, will they realize their own malicious left-wing politicians deliberately created the food scarcity emergency?

India is also reportedly moving to halt its own rice imports, reports Bloomberg.com, unleashing a "devastating" food scarcity scenario with worldwide implications. According to Bloomberg, India accounts for 40% of the global rice trade. From that story: Rice may be India’s next food protectionism target after it restricted wheat and sugar exports, analysts say, a move that could have a devastating impact on global food security as it’s an important staple. India’s curbs on wheat and sugar exports sent shock waves through global markets as it marked an escalation in food protectionism that’s seen countries choke off flows of locally-grown supplies to the world. A similar move on rice by the No. 1 exporter at a time when crops like wheat and corn are soaring would threaten to plunge millions more into hunger and boost inflation risks. According to the India Times, Hungary has banned wheat exports, and nations like Argentina, Bulgaria and Turkey are working toward outright bans of crop exports in order to meet their domestic needs. All across the world, crop yields are collapsing and food supplies are dwindling. International trade is being strangled and domestic supplies are become more scarce and far more expensive.

It's all deliberate, driven by destructive USA / NATO policies that strive for famine and collapse

Nearly all the problems with food scarcity and food inflation are driven entirely by malicious policy decisions stemming from the arrogant USA and oblivious NATO nation "leaders" who have lost all ability to recognize economic principles (or who actually want mass starvation and depopulation). Together, the USA and NATO nations de-platformed Russia from trading in crops, fertilizer and natural gas, setting off this chain reaction of scarcity and unprecedented price increases for farm inputs, setting into motion a global starvation scenario that will worsen for years to come. Even if Russia were suddenly re-platformed back into the SWIFT system tomorrow, the damage to the food supply for 2022 - 2023 has already been done. Mass starvation will burn through the world's developing nations for the next two years, and even in first world nations, working-class citizens will find themselves spending higher and higher portions of their incomes on basic food supplies. This will, of course, lead to food riots. It's all by design. The idea is to cause mass chaos and martial law in America before the mid-term elections. In order to achieve that, the corrupt, illegitimate Biden regime had to whip up war with Russia, unleash economic protectionism across the globe, shut down fertilizer shipments in the USA, drastically raise fuel prices by shutting down pipelines, and engineer a food scarcity emergency by making sure the USDA keeps paying farmers to destroy crops and destroy tractors (in exchange for USDA payouts, of course).

Food industry transport workers are sitting on their hands in Florida

Yesterday a source informed me that food industry transport workers in Florida who would normally be working 16 hour days right now -- transporting tomatoes, peppers, melons, fruit and other crops out of Florida -- are sitting on their hands with zero work. There are virtually no crops to transport in this particular area of Florida where 10,000+ acre farms are common. The fields weren't planted, and there are no crops to harvest. These crops normally supply restaurants and grocery stores across the entire Eastern half of the United States. Now, they have nothing, and the farmers have no reason to even plant anything until fertilizer and diesel prices come down. Official crop yield statistics haven't yet caught up to this reality, but once Florida reports its crop yields for June, the numbers are going to be catastrophic. The oblivious masses of America will see grocery shelves going increasingly bare beginning in August, then accelerating through the end of the year. Long before the mid-terms, many American families will be in a panic over food and fuel prices. Yet the worst is still to come, because 2023 will be disastrous as food and fuel become increasingly scarce and expensive. We will see food riots in America before the end of this year, and we will almost certainly see serious food rationing in 2023, possibly followed by "food passport" rationing cards or other schemes designed to limit how much food the public is allowed to buy. "Joe Biden's national weight loss plan" is about to become a reality as Americans face real famine and civil unrest. This is what happens when you allow Democrats to steal elections and place incompetent criminals in power. When the traitor Mike Pence refused to do his job on January 6 -- and the FBI ran another false flag insurrection op -- this is what you get: A nation being dismantled as an act of economic warfare carried out against the people of America by radical left-wing Marxists like Obama and corrupt criminal families like the Bidens and the Clintons. Get the full details on all this and much more -- including Russia's upcoming retaliation against America's cyber attacks -- in today's Situation Update podcast: Brighteon.com/bc8df6a9-7a39-4666-953a-cec4d19a21ac   Discover more information-packaged podcasts each day, along with special reports, interviews and emergency updates, at: https://www.brighteon.com/channels/HRreport Follow me on: Brighteon.social: Brighteon.social/@HealthRanger Telegram: t.me/RealHealthRanger Truth Social: https://truthsocial.com/@healthranger Gettr: GETTR.com/user/healthranger Parler: Parler.com/user/HealthRanger Rumble: Rumble.com/c/HealthRangerReport BitChute: Bitchute.com/channel/9EB8glubb0Ns/ Clouthub: app.clouthub.com/#/users/u/naturalnews/posts Join the free NaturalNews.com email newsletter to stay alerted about new, upcoming audiobooks that you can download for free. Download my current audiobooks -- including Ghost World, Survival Nutrition, The Global Reset Survival Guide and The Contagious Mind -- at: https://Audiobooks.NaturalNews.com/ Download my new audiobook, "Resilient Prepping" at ResilientPrepping.com
Mastodon
Parler
Gab
Copy
Tagged Under:
collapse hunger agriculture starvation food supply farming emergency food shortage wheat crops rice chaos inflation grains groceries food scarcity food protectionism
You Might Also Like