Top Stories from Independent Journalists Across the Web
Shanghai's mass "quarantine" (concentration) camps have no showers; lights stay on 24 hours
By ethanh // 2022-04-19
Mastodon 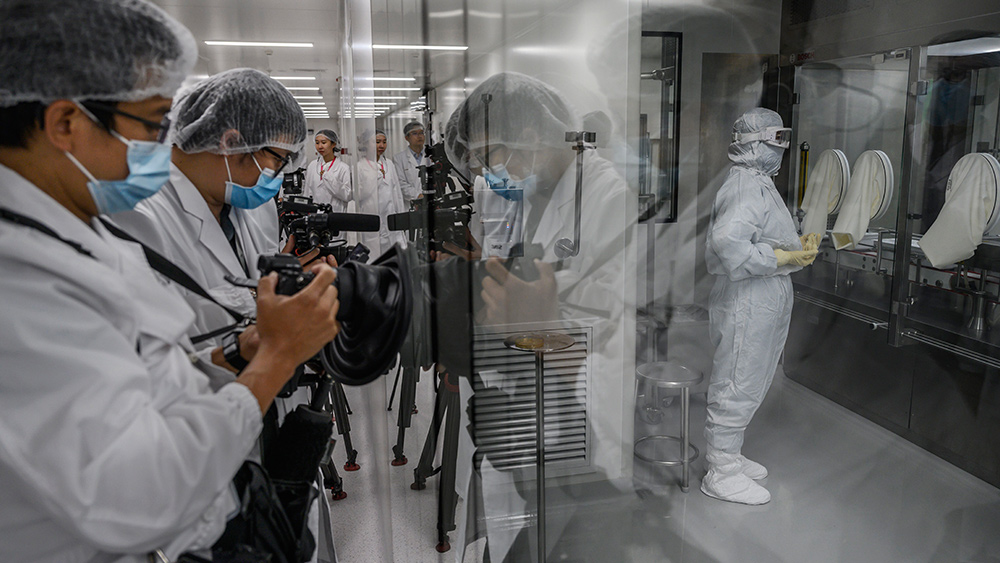 As if the horrors in Shanghai during the latest forced Wuhan coronavirus (COVID-19) lockdown were not already bad enough, we are now receiving word that the government there has set up large "quarantine" centers that are reminiscent of concentration camps. According to reports, Shanghai's mass quarantine center at the city's exposition center keeps the lights on 24/7. It also has no showers, even though captives are expected to stay there for about a month. A 30-year-old Ukrainian by the name of Jane Polubotko who tested "positive" for the latest strain (BA.2) of the Omicron (Moronic) variant of the Fauci Flu was forced to stay here, and she says she never saw darkness the entire time. She and thousands of strangers were confined to the large room, which is set up in an office cubicle format with clusters of mattresses for captives to sleep. The environment made Polubotko feel like a "COVID criminal," she told The Wall Street Journal. In total, Polubotko spent 18 days in a row unshowered due to the confinement. The first thing she did when she got home, needless to say, was take a long, hot shower – as well as turn off the lights in order to sleep. "Hearing nothing but silence and being able to adjust my own lighting," Polubotko said about her experience returning home. "I won't take these things for granted again."

Is China planning to once again export this new round of tyranny to the West?

The Chinese Communist Party (CCP) is calling this quarantine facility and others like it a "fangcang," or square cabin. It is a makeshift hospital, of sorts, that supposedly handles "cases" in order to prevent more "transmission." Keep in mind that like the vast majority of other people who test positive for the Wuhan Disease, Polubotko never actually got sick. Even so, she was forced to remain inside the facility for nearly three weeks against her will. While the CCP does not publicly reveal this type of data, it is estimated that some 270,000 others like Polubotko are currently under "medical observation" throughout China. "Shanghai has built more than 100 makeshift hospitals with a total capacity of more than 160,000 beds for COVID-positive individuals with mild or no symptoms, according to state media," reported the Journal. "The city had 7,776 people hospitalized and more than 220,000 under medical observation, China Daily reported Thursday." In the West right now, COVID is pretty much over – and it has been for the past several months (or some would argue the past two years). This is one of the reasons why the situation in Shanghai is so anomalous and disturbing. Recalling back to early 2020, much of the mayhem during the first round of the plandemic began in China, only to eventually trickle its way West. If history is any indicator, this could be the plan once again – but will Westerners stand for it? In the United States, anyway, it is hard to imagine, despite how crazy things have become, that the average American would tolerate these large forced quarantine centers based on everything that has been revealed about the scamdemic since the time of the first lockdowns. It is important to keep a close eye on things, though. Americans cannot let the government impose another lockdown under any circumstances, even if there are promises that it will only last 14 days to "flatten the curve." We already heard that line and it proved to be a lie. "So what IS the government good for??" asked a reader at Natural News, making a very good point that is worth pondering. The latest Fauci Flu news can be found at Fascism.news. Sources include: NaturalNews.com WSJ.com
Mastodon
Parler
Gab
Copy
Tagged Under:
fascism prisoners pandemic lights concentration camps Shanghai showers inhumane death camps CCP quarantine center mass quarantine COVID Plandemic concentration camp covid camps Jane Polubotko
You Might Also Like