Top Stories from Independent Journalists Across the Web
SUDDEN DEATH: We all have to somehow come to grips with people dying all around us as globalists wage TOTAL WAR against humanity
By healthranger // 2022-03-30
Mastodon 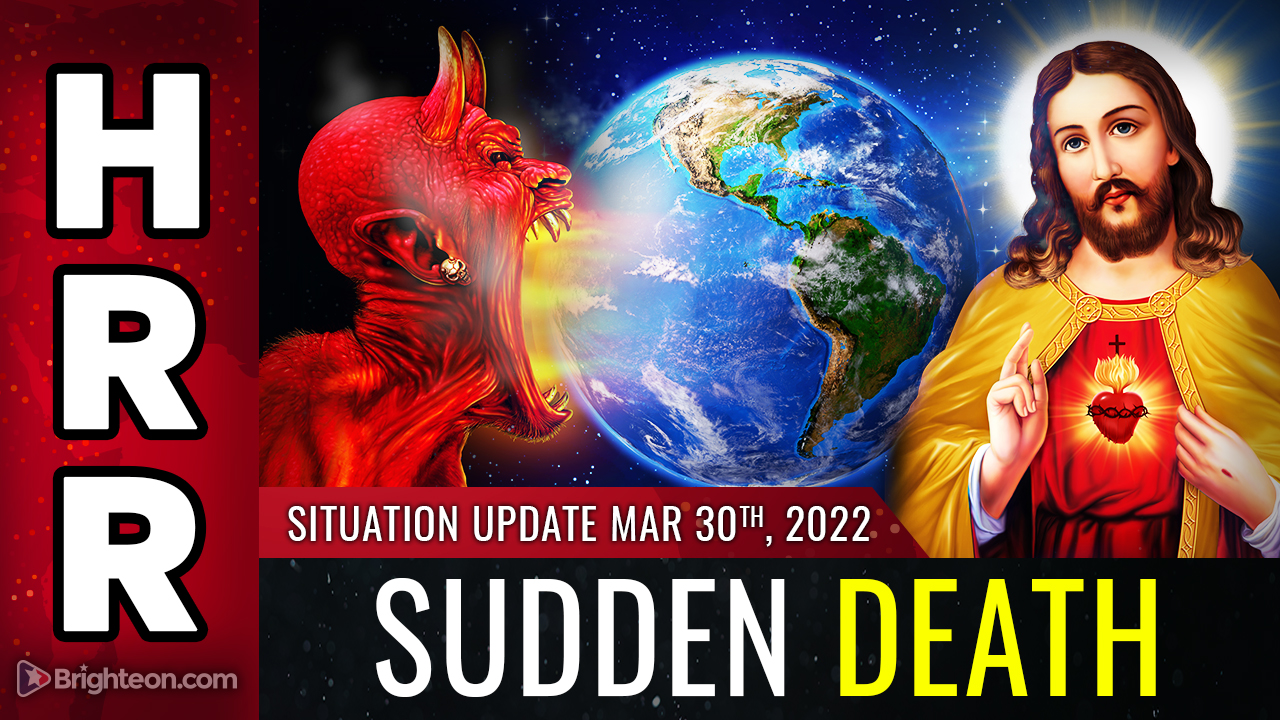 Today's Situation Update podcast is entitled, "Sudden Death." It's both a description of what I just experienced with the loss of a beloved ranch animal late last night, as well as an observation about the globalists waging total war on humanity and thereby achieving the mass extermination of billions of human beings. Strange, isn't it? How we can talk about "billions" of human beings being outright murdered by vaccines and engineered famine, yet when an animal close to us dies -- or a loved one, relative, spouse, etc. -- it hurts far more than the thought of "billions." That's because every human being who is murdered by the globalists was loved by someone. Every death counts because every life matters. Yet we live in such an insane, fascism, woketard society that merely uttering, "All lives matter" gets you de-platformed and branded a racist. That's because the left-wing marxists running America are actually members of a satanic death cult. They celebrate death, which is why they celebrate post-birth abortions (i.e. murdering human babies up to 28 days after they are born). They even celebrate mass death of billions in the name of "saving the planet," which explains how we got to this current situation where nearly every government in the world is now weaponized against its own citizens, unleashing biological weapons, death-inducing vaccines and engineered food scarcity that's designed to collapse human civilization. The sad, blatant truth is that we are all going to have to come to grips with people dying all around us. This includes people you know, people you love and people you once considered friends, neighbors or coworkers. Over the next two years, many of these people will face extreme food scarcity and panic. Their personalities will transform into something you and I no longer recognize. They will change from being friends to looters, in many cases. And some will resort to violence to get the food they need. Over the next decade, an estimated 1-2 billion people will die across the planet from vaccine-induced injuries and sudden death. This outcome is already baked in and cannot be reversed by any known treatment. Millions have already died -- and at least 1.1 million are already dead in the United States alone -- but the final death count from these vaccines will be measured in the billions.

Then there's the engineered food scarcity. We have arrived at the point of government treason and engineered starvation where governments fake bird flu outbreaks among chicken flocks in order to demand the culling of millions of chickens, thereby driving up food prices and increasing food scarcity. At the federal level, every effort is being made to destroy food production, including the USDA paying farmers to destroy their own crops, as the video below reveals. According to this video, farmers are being offered 150% of the value of their crops to destroy them and make sure these crops don't enter the food supply: Brighteon.com/ded1bfca-63d2-48bf-a6ec-9ac44068325a This next video from Infowars' Greg Reese reveals a shocking message from Shad Sullivan, an American farmer. He warns that farmers are being ordered to destroy their livestock and plow under food crops. It's all part of the engineered, weaponized food scarcity that's being unleashed on the world in conjunction with planned bioweapons attacks, spike protein biological assaults and a global economic collapse: Brighteon.com/a175f5ae-0da5-44a9-a612-c724b77b7ed5 When your own government literally pays (and threatens) farmers to destroy crops and kill off their own livestock, rest assured you are living under a genocidal regime of totalitarian enemies of humanity. They will stop at nothing to starve you to death in their attempts to wipe humanity from the face of this planet.

In today's Situation Update podcast, I cover how this war against humanity is a spiritual war between good and evil. All the globalists, high-level Democrats, vaccine-pimping scientists, journo-terrorists and woketard school teacher pedophiles are, of course, working for Satan. So are many of the church leaders in the mega-churches that are nothing but fronts for satanism and obedience to evil government. On the other side of all this is Jesus Christ, God and the true Christians who maintain their obedience to God. They exercise morality, courage, compassion and love for life. These are the remnant of humanity, and it is these people who will rebuild a new civilization in alignment with God's laws after the collapse of this current civilization and the eradication of evil. Understand that as this happens, billions of human beings will die, and billions more will be destroyed by God for their evil ways. The planet will become sparsely populated by the time this is all over. Cities of extreme evil -- San Francisco, Washington D.C., Chicago, Seattle, Portland, etc. -- will be ghost towns, with almost no one remaining. Those of us who live through what's coming will see death on a daily basis. We will often be surrounded by the dead and the dying, and we will witness them lash out with their evil intent, their pedophilia, their coordinated lies and their contempt for God. You see this contempt every day in the actions of the corporate media, the White House and the fake president, Big Tech, public school counselors in liberal cities, Hollywood and even Disney, which has become a hub for pushing pedophilia and grooming of young children. Understand that most of these people are pro-vaccine and anti-prepping. The vast majority of them will die in the coming decade. They will die from the spike protein, or starvation or even from violence stemming from the economic collapse. For those who are steeped in evil and yet somehow manage to survive all that will be destroyed by the Word of God, in an instant upon His return. The world will instantly go from chaos to silence. The madness, lunacy and murderous intent of the anti-human Leftists will be vanquished as their souls are sent to purgatory (i.e. infinite separation from God). From there, humanity will rebuild a new society. And this is the reason why our own survival is so critical: Because we shall be the architects of the new society, and we must make every effort to banish the mistakes and corruption of this current society. We must decentralize all power, agriculture, finance, technology and (limited) government. We must enforce morality and stop those who pervert the morals of a civilized world. We must arrest and imprison those engaged in corruption or coordinated media lies designed to mislead the public and steal elections. We get to decide the new rules of the new society, for we will be the survivors. Discover more details in today's situation update podcast, which is admittedly a bit on the gloomy side due to the sudden death on my ranch: Brighteon.com/7c2b0523-07ee-4535-9dca-6dcaeb1068fe Discover more information-packaged podcasts each day, along with special reports, interviews and emergency updates, at: https://www.brighteon.com/channels/HRreport Also follow me on: Brighteon.social: Brighteon.social/@HealthRanger Telegram: t.me/RealHealthRanger Truth Social: Username = HealthRanger Gettr: GETTR.com/user/healthranger Parler: Parler.com/user/HealthRanger Rumble: Rumble.com/c/HealthRangerReport BitChute: Bitchute.com/channel/9EB8glubb0Ns/ Clouthub: app.clouthub.com/#/users/u/naturalnews/posts Join the free NaturalNews.com email newsletter to stay alerted about new, upcoming audiobooks that you can download for free. Download my current audiobooks -- including Ghost World, Survival Nutrition, The Global Reset Survival Guide and The Contagious Mind -- at: https://Audiobooks.NaturalNews.com/
Mastodon
Parler
Gab
Copy
Tagged Under:
starvation satanism famine evil genocide God twisted depopulation mass death good jesus Satanic sudden death global reset
You Might Also Like