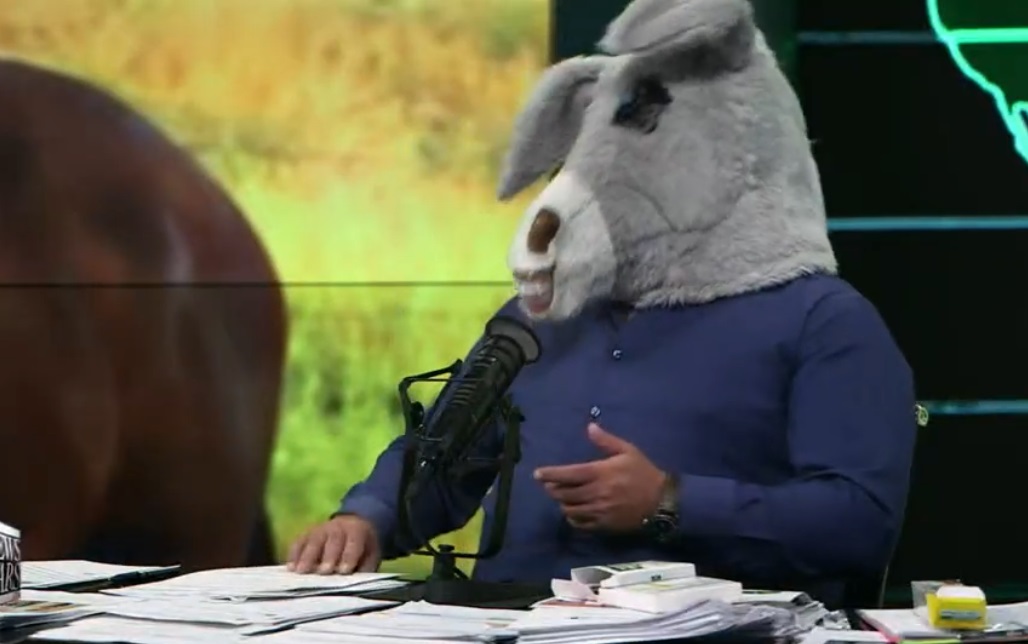 No one is surprised anymore when a left-wing media outlet fabricates a story out of thin air and tries to publish it as "fact," but when Rolling Stone completely fabricated a recent story trying to destroy ivermectin, it blew up in their faces in spectacular fashion. The original story falsely claimed that hospitals in Oklahoma were filled with ivermectin-poisoned patients who had all overdosed on the drug, including a bizarre claim that one patient had gone blind. As the hospitals were being overrun with ivermectin injuries, Rolling Stone dramatically claimed, gunshot victims were forced to wait for medical treatment. The feature photo used in the story began raising questions almost immediately, however, when it appeared to show hospital patients wearing winter coats, supposedly standing outside emergency rooms in August in Oklahoma. The story had all the accoutrements of a typical left-wing media smear piece: The sense of alarm, condemnation for those advocating ivermectin, and a supposed real-world cost in lives lost because hospitals were being completely overrun. (The media has been lying about overrun hospitals since day one of the plandemic...) Here's the screen shot of the Rolling Stone's story headline and subhead:

There's only one problem with this dramatic story: It was all made up. Just like the time Rolling Stone utterly fabricated a series of stories claiming "campus rape" was exploding across America -- which turned out to be completely false -- the discredited rag did it yet again, trying to discredit ivermectin but only discrediting itself. As InfoWars reports in exposing the fake Rolling Stone hit piece: The problem is, Northeastern Health System‘s Sequoyah branch that’s the focus of Rolling Stone’s article released a statement on its website claiming Dr. Elyea does not work at the hospital, and has not treated any patients in at least two months. Furthermore, the hospital itself claims it hasn’t treated a single patient for ivermectin overdose. NHS Sequoya also refuted Elyea’s claim that its hospital was overwhelmed with patients who overdosed on ivermectin and had not turned any patients away as a result. “NHS Sequoyah has not treated any patients due to complications related to taking ivermectin. This includes not treating any patients for ivermectin overdose.” “All patients who have visited our emergency room have received medical attention as appropriate. Our hospital has not had to turn away any patients seeking emergency care.”

Of course, the total fakery of the story didn't stop left-wing media rags from catapulting the claims into popular consciousness. Business Insider, The Independent and The Guardian were among left-wing news outlets that ran with the story, not bothering to conduct even bare minimum fact checking before reporting the ivermectin scare story as if it were real. 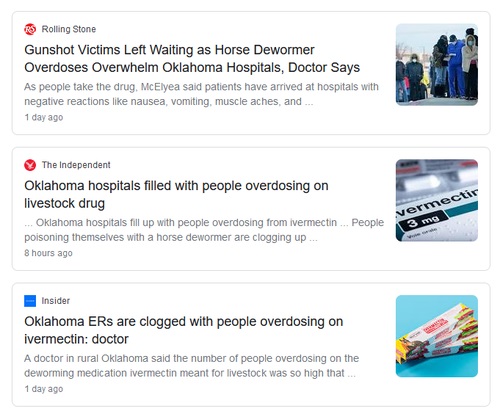 Left-wing propagandists like Rachel Maddow (MSNBC) ran with the fake news story, repeating the lie that ivermectin was "backing up rural Oklahoma hospitals, ambulances" and claiming that people were suffering with "vision loss." Not only were the claims against ivermectin utterly fabricated, but even the "gunshot victims" part of the story was complete hogwash, likely a figment of imagination from another hyperventilating left-wing anti-gun nut who imagines the entire world being overrun with guns that shoot people all by themselves. As Zero Hedge explains: What's more, Grove, OK - with a population of 7,129, had just 14 aggravated assaults in all of 2019 according to the FBI's latest data. We somehow doubt that 'gunshot victims were lining up outside the ER,' while just 11 ivermectin related hospital cases have been reported in the entire state since the beginning of May. Mocking the fake news media, InfoWars founder Alex Jones trolled the left-wing media and hilarious consumed ivermectin horse paste live on air yesterday, demonstrating the drug's safety and revealing how left-wing media whips itself into an irrational fear about almost everything: In today's Situation Update podcast, I delve into the total fakery of the smear attempt against ivermectin, pointing out that while typical Leftists are scared to death to touch ivermectin, they're more than happy to inject themselves with biological weapons that are dishonestly labeled "vaccines." Democrats also seem to love toxic fluoride and now GMOs, as mainstream left-wing media outlets have all gone pro-GMO in their coverage. Brighteon.com/73a770d9-0873-426d-8040-b7329e53922a

In attempting to discredit ivermectin, left-wing media only discredited itself

The beautiful conclusion of all this is that in their desperate attempts to discredit ivermectin, the lying left-wing media only further discredited itself. As Glenn Greenwald pointed out, this entire incident once again proves that Democrats are happy to lie about anything as long as it serves their political agenda. They have no commitment to honesty, accuracy or truth of any kind. They will parrot a completely fictional story if it helps them push more vaccines that are killing people (while Big Pharma funds their operations with advertising money). https://twitter.com/ggreenwald/status/1434539307415519238 Twitter, of course, which routinely bans those who criticize vaccines, Joe Biden or abortion, allowed the fake Rolling Stone story to trend and be openly shared, despite the fact that it was entirely fabricated. No one is surprised. In the end, while conservatives may be consuming completely harmless (and highly effective) ivermectin -- which was approved as a drug for use in humans by the FDA in 1996 -- Democrats are jabbing themselves with deadly bioweapons that will kill millions in the coming years, leading to collapse in Democrat voters (and an even more desperate effort by Democrats to make sure the dead can still vote).
Mastodon
Parler
Gab
Copy
Tagged Under:
vaccines fake news hospitals journalism pandemic Oklahoma Rolling Stone badscience badhealth badmedicine fiction COVID ivermectin just science
You Might Also Like